Additional analysis is needed to appreciate the two performances this fellow has posted in his career. He made his debut at Lisronagh where the time of the races was eleven seconds faster than average and still managed to finish a close fourth beaten about five lengths in a race where the winner has since sold for 90,000 and the third for 60,000. He then turned up last weekend and not only did he find the fastest race on the card again he was the one making the running going to four out while the winner was sitting well off this strong pace. Yet again this was the fastest time of the day and this fellow is largely responsible for this. Ultimately he had to settle for second but only following a brave battle where he went down by a very narrow margin and to view him in the context of simply a maiden may not be doing his performances nor his ability justice. 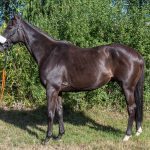